Journal of the Star Wars

If we are to trust Pablo Hidalgo, Twitter-active member of the Lucasfilm Story Group, the answer to this is very simple: Snoke is Snoke.

However, in a fandom where secret and dual identities are par for the course, “Snoke is Snoke” simply doesn’t cut it for many fans.

One of the most popular fan theories about Snoke was that he was Darth Plagueis, the Sith master of Darth Sidious/Sheev Palpatine/The Emperor (this case, you understand, is the perfect illustration of why ‘Who is Snoke?’ is a question in the first place), who is referenced in Revenge of the Sith. Plagueis ‘The Wise’ possessed knowledge of how to cheat death (though this, ironically, didn’t keep him from being murdered by his own pupil), and this particular quality made him a popular name in discussions of Snoke’s true identity. However, the ‘Snoke is Plagueis’ theory has been soundly torpedoed by Mr Hidalgo: 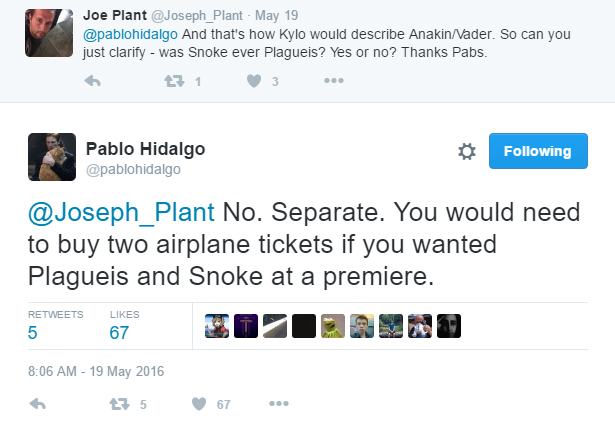 Another name to have recently entered the Snoke debate is Gallius Rax, a character featured in the Aftermath trilogy by Chuck Wendig. In the second book in the trilogy – Aftermath: Life Debt – Rax is revealed to have been an orphan on Jakku at a time when the Emperor was taking a strong interest in the planet. Rax stows away on a ship from the Imperial fleet only to be brought before the Emperor, who compels him to come to him with the Force. The boy can resist his command, and this piques the Emperor’s interest. Rax grows up to become one of the Emperor’s closest advisers, and also demonstrates decidedly Snoke-ish qualities such as a thin, pale appearance and eyes compared to black holes “swallowing up the light”. Most notably, he shows a sinister interest in recruiting children to suit the purposes of the Empire, recalling the First Order’s recruitment programme and, potentially, Snoke’s own seduction of the young Ben Solo.

However, we shouldn’t yet be placing all of our Snoke eggs in a Rax-shaped basket. Pablo has already (in the most jokey of fashions) thrown shade on the idea:

As disappointing as it may be to some, the real answer may well be that Snoke is indeed Snoke – a new character with a mysterious backstory that will become clear with time.

Journal of the Star Wars is a blog dedicated to meta and analysis concerning the Star Wars sequel trilogy. From Rey's backstory and Ben Solo's fall to the question of the mysterious origins of Snoke and the First Order, you can expect to find ample theories, analyses and teases to keep you going as we await the release of Episode VIII.
Loading Comments...
Comment
×
<span>%d</span> bloggers like this: